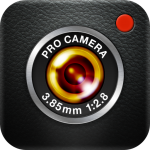 Among all the excitements of iPhone 5 announcements, Cocologics’ CEO Jens Daemgen is in San Francisco to release the update of ProCamera HD, the first full-featured camera app for iPad. The launch price-drop for ProCamera HD will continue for a limited time.

This update fixed the crashes and issues when exporting to Camera Roll.

“At Last, A Proper Photo App For a iPad” – Cult of Mac

“ProCamera HD has launched, bringing the versatile and powerful camera app from iPhone to iPad” – TUAW

ProCamera HD inherited the full suite of ProCamera’s professional capabilities (except for the photo editing, which will be added soon) and ease of use, and added several new and unique features to take full advantage of iPad.

iPad 3 has a dilemma, despite the big jump in the high-definition retina display, the camera capacity is only 5-megapixel compared to 8-megapixel in iPhone 4S. That’s where ProCamera HD came in. ProCamera HD’s new Expert Mode (patent pending), along with other features, allows users to have a complete control on exposure, focus, and white balance, take much better photos and videos, and then take advantage of iPad 3’s high-definition retina display.

Other features like Anti-shake, Self-timer, Videozoom, RapidFire mode, Advanced geotagging, QuickFlick Album, DateStamp, Virtural horizon, and many more are all in place.

ProCamera HD has strong support for social networks sharing. User can upload photos to Facebook, Twitter, flickr, and DropBox – individually or in bulk! Email sharing with multiple photos is also possible. New and unique in ProCamera HD is video sharing to DropBox – in full resolution. This easy sharing makes iPad a complete and the best travel companion.

The iPad is an essential travel companion, with its media-rich functionality. Now with ProCamera HD, iPad will become a primary camera for photos and videos, and social media sharing.

ProCamera (for iPhone) is also having a price-drop for a limited time right now. Download it here.

ProCamera HD, together with ProCamera, will cover all your iDevice photography needs.

Compatibility: iPad 2 and iPad 3. Control over focus requires an iPad 3. (The iPad 2 has a fixed-focus camera.)