Great user and reviewer feedback for ProCamera 4.0 App for iPhone! 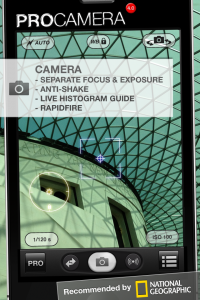 It’s been a big week here at ProCamera!  We released ProCamera 4.0 two days before Christmas and have been humbled by the positive response we’ve received since.

Users have told us that their particularly enjoying the new Capture Formats (especially the 1:1 Square) coupled with the direct SquarePrepare upload to Instagram! For those that haven’t downloaded the new version yet, this previous blog post outlines the exciting new features.

Positive user reviews have also helped us on the App Store, with ProCamera hitting the Photo/Video Top Ten in over 20 countries and number one in five!

ProCamera 4.0 has also been featured on a number of international blogs and sites.  Here’s a short sample from two of the reviews:

The new ProCamera 4.0 has over 15 new features. Most are big new features to the app, not little bug-fixes. They really improve significantly how you work with the app. All the new features are seamlessly integrated and add no clutter to the main areas of the app. The user interface is still clean, fast, and easy to use. This is an impressive update.

Marty Yawnick at Life in Lofi

We here at AppAdvice can also vouch for ProCamera’s excellence. We reviewed the app rather favorably back in 2010. And more recently, we included it in our Best iPhone Camera App Showdown. ProCamera 4.0 offers a great deal of new photo, video, editing, sharing, and usability features.

For photo, the app now lets you capture in square (1:1), widescreen (16:9), standard (4:3) and 3:2 formats. The app also lets you save, share, export, and delete photos with the new Lightbox section. And simultaneous two-finger focus and exposure control plus library and album enhancements are thrown in for good measure.”

We’ve also been very appreciative of all your feedback (including Volume Trigger concerns), bug reports and future suggestions.

As a thank you for all the support we’ve received we will be extending the ProCamera 4.0 price drop ($0.99 down from $2.99) for another few days.  You can download the app by clicking below.