We’re really excited about this week’s Meet The Developers (well let’s be honest…we’ve been excited about all of them…) but this week is particularly great as we simply love the ProCamera app! It’s by far one of the most used on the TBL iPhones, so we were pleased as punch when Jens Daemgen took the time to answer our questions about the app itself and the team of developers behind this awesome camera replacement!

How would you describe Daemgen.net as a company, and what apps do you offer?

Daemgen.net is a startup that’s about to become grown-up. It all started with ProCamera, which was our first big app. It was first submitted to the App Store in December 2008. At this time the App Store was a little more “difficult” than it has become today. At the time of iOS 2.x there was no camera API at all. It was only possible to make a camera app by modifying SDK components with a technique called Runtime-Reflection and working with very high-level code. Apple did not forbid this technique since I didn’t make use of any private APIs, which would have been forbidden. It took three months of approval time, but finally it was released on the App Store. 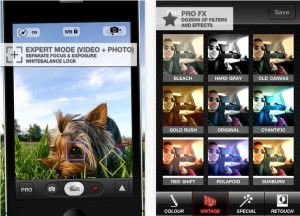 Ali, a good friend of mine, who is a Mac-“Pro” for as long as I have known him, started helping out with Marketing and building up the product after the first success in Switzerland. One of the biggest challenges was the time when iOS 3.0 was introduced. With that release Apple officially forbid modifying the camera components and thereby had forbidden third party camera apps. Confusingly, some new camera apps were still released on the App Store. But all our updates for iOS 3 were rejected in a row because we supposedly were using private APIs. All mails to Apple stayed unanswered. We joined in with a group of more than 20 camera app developers and wrote a petition to Apple pleading for a camera API and to allow our camera apps again to save our businesses.

Luckily Apple had an open ear for us and realized the necessity for an official camera API which was then introduced with iOS 3.1.

To make a long story short – today we are a team of 5 people on the core-team plus a professional photographer and several freelancers. Recently, we invested lots of resources and energy in “business development”. We realized that we needed to grow to keep up with the demanding App Store business and to be able to satisfy our customer’s wishes – and also to realize our vision for the future.

Read the rest of the interview on > The Beginners Lens