A next gen iPhone to support interchangeable camera lenses?

On a recent trip to Hong Kong, I realized that my iPhone camera simply wouldn’t ‘cut it’ for those amazing skyline shots across Victoria Harbor. It was that moment when I first fantasized about popping on a special telephoto iPhone lens (concept) that might do justice to long distance, wide-panorama shots. The fact is that there are some nice ‘bolt on’ options, such as the OWLE (Optical Widget for Life Enhancement) Bubo, available today. But there may eventually be an ‘Apple designed’ way to add interchangeable lenses to a ‘nex gen’ iPhone. 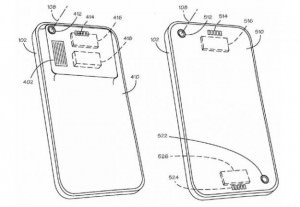 If you read through a recent Apple patent filing (published by US Patent and Trademark office on June 14, 2012), called “Back Panel for a Portable Electronic Device with Different Camera Lens Options,” you can see that Apple engineers have at least considered that possibility (interchangeable lenses). Or perhaps Apple recognizes that in today’s litigious environment, it’s best to patent every good idea before the competition does the same and then proceeds to extract their financial reward. Being first counts. So while Apple may very well eventually come out with an iPhone designed to support different lens adaptions, it may not be in the next model, or the next, or the next … but someday? Perhaps.