Are 3-D cameras coming to Apple iDevices? It is hard to say whether this is just forward-thinking Apple engineers tinkering away on futuristic camera technology … or something to be deployed in next generation iPhones and iPads? Whether its now (soonish) or later, 3-D is certainly something intriguing for iCamera enthusiasts to ponder. 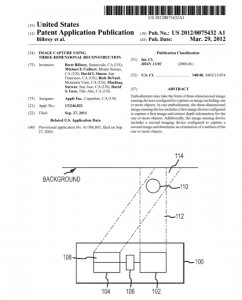 One of Apple’s patent filings describes the use different sensors to capture “polarized and non-polarized” images that are integrated with a processing model that would derive depth data used to render 3-D images.

In another patent filing, Apple outlines use of an image sensor with a polarized filter that would be joined by two sensors used to capture image luminance. A processor would then calculate the proper 3-D image depth.

Yet another patent filing describes applications that could be used to scan a user’s face and to generate a virtual 3-D avatar.  Now that sounds like fun … or a bit embarrassing if the subject is having a bad hair day.

Michael Douglas enters virtual reality for a pointless examination of some web pages.

This clip from the politically reactionary feature film Disclosure gives a glimpse of the limited imaginary of virtual reality in 1994. After donning a set of VR goggles and a data glove, Michael Douglas enters “The Corridor,” a 3D visualization of a data repository, in order to investigate company records of mismanagement of a production line for high-speed CD ROM drives. Unlike the surfeit of VR feature films that would be released in 1995, Disclosure is unable to conjure an image of virtual reality that goes much beyond a 3D rendering of conventional 2D information: documents, video conferences, etc. To heighten the drama in this scene, a bizarre, wireframe 2D model of his sexual harasser, Demi Moore inexplicably looms in the background as she attempts to destroy the evidence Douglas is attempting to uncover.