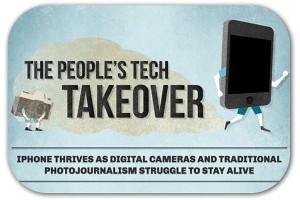 Photos captured via smartphones now dominate uploads on photography and social media sites. Further, as ProCamera outlined in our November 23 post, The evolution and popularity of iPhoneography, iPhone models are leading the way and we believe that ProCamera app (3.5.1) is contributing in many positive and creative ways.

Beyond the story of the rapid ascendance of iPhone and smartphone camera technology, are the implications for photojournalism. While few would dispute that high-end digital/SLR cameras, costing hundreds to thousands more, can outperform highly compact smartphone cameras, what is up for debate is ability of professional photojournalists to compete with smartphone toting amateurs. 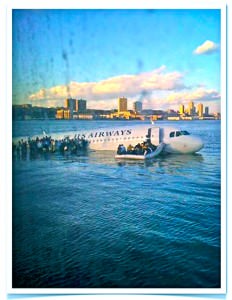 Citizen journalist, Janis Krums, was interviewed by MSNBC only minutes after posting his iPhone photo (above) on Twitter. US Air flight 1549 in Hudson 1.15.2009

Social media allows for virtually “instant sharing” of imagery and reporting by way of camera/video ready smartphones. What counts most in the news business is:

On points 2 and 3 above, the “amateur” is now at a decided advantage over the “pro.” According to Wall Street Journal photographer Rob Bennett:

“If the game is to be in the right place at the right time, I can’t win at that game, because there’s only one of me. I’m resigned to that. The iPhone people are going to be there when the bomb goes off, when the house burns down. They’re going to crush that market, and there’s nothing I can do about it.”

Despite the new competition, there will always be a role for seasoned photojournalists in coverage of important stories. And when events are shrouded by conflict, competing interests and controversy, a professional journalist is essential. Nonetheless, the rise of “citizen journalists,” enabled by the proliferation of smartphones, is a trend that will not soon be reversed. Telling perhaps was the fact that in November of 2011, CNN fired fifty (50) of its full-time photojournalists. Part of CNN’s rationale was the dramatic rise in viewer submitted content, obtained at no cost, and the popularity of CNN’s iReport platform, where people at the scene could upload their own images and stories (again, at no cost to CNN). 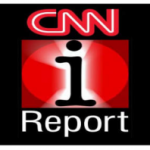 “We looked at production demands, down time, and international deployments. We looked at the impact of user-generated content and social media, CNN iReporters and of course our affiliate contributions in breaking news. Consumer and pro-sumer technologies are simpler and more accessible. Small cameras are now high broadcast quality. More of this technology is in the hands of more people. After completing this analysis, CNN determined that some photojournalists will be departing the company.”

CNN’s layoff of photojournalists was widely publicized, but it wasn’t the first and won’t be the last. Frugaldad created an interesting graphic (below) to illustrate the impact of smartphones, and iPhone in particular, on the coverage of global news … the new age of iPhotojournalism.

“I don’t think anyone could have predicted that smartphones would end up playing a major role in journalistic coverage or revolutions worldwide—but as this infographic shows, they have. I feel like you can see how smartphones are beginning to represent in one device abilities we used to have to spend money on an array of different electronics to achieve. They can be a camera, a web browser, a social media hub, and, of course, a phone.

This infographic lays out how smartphones are overtaking many point-and-shoot cameras in popularity: for example, the iPhone has surpassed the Canon Powershot (a camera I have) in upload popularity on Flickr. It also examines the tension between “citizen journalism” and traditional photojournalism. While that’s a very new issue, I think it is well worth considering. It’s my hope that citizen journalists with smartphones can become a driving support to photojournalism, and that the proliferation of media from ordinary people will help keep the world at large more informed and aware.”