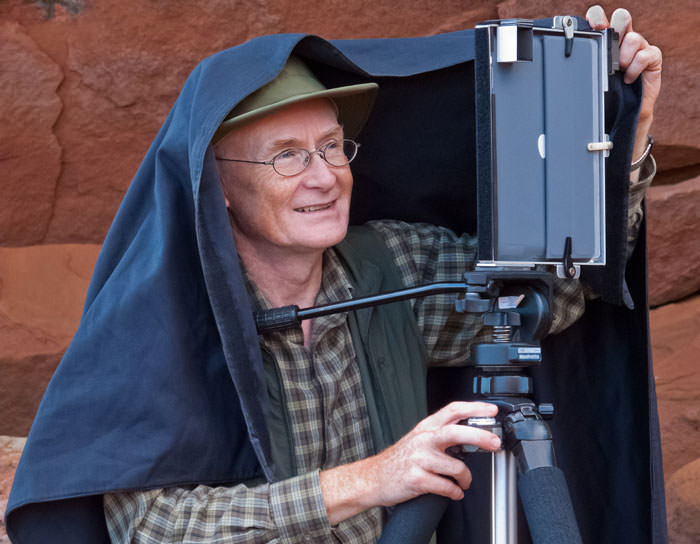 An accomplished professional photographer, Townsend is passionate about achieving high quality results from his iPhone and iPad. According to Townsend “the main thing is that if you want good results you have to treat the iPhone like a real camera.” To get the most out of his mobile devices, Townsend makes his own photographic accessories that complement his shooting style. We were amazed by Townsend’s ingenuity in solving a few common mobile photography challenges. Here are four inventions as described by Townsend himself. My tripod frame was made to fit the particular case I have on my iPhone so it probably wouldn’t fit another case type.

Things to note in my first photo: the tripod frame has two mounting positions for vertical & horizontal orientation. The rotation centre is directly under the lens (this is a point that most tripod attachments miss) and this is essential when doing panning in video and for making 360 panoramas.

You can see the mounting surfaces extend beyond the edges of the frame and there are a number of reasons for that, but that’s another story. It is made to fit the Manfrotto tripod camera plate. And for video I just switch to my Manfrotto fluid head and the same camera plate fits. 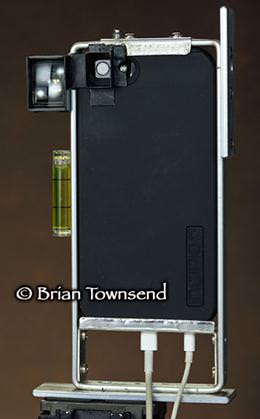 The second picture is in vertical orientation which I use a lot, and for 360 panoramas. Note, I have added a lens hood to avoid the dreaded lens flare. It really helps! Beside that, you can see the external viewfinder. I scrounged it from an old compact 35mm camera I took apart. It was a zoom finder so I was able to adjust, and then lock, the zoom level to match the view of the iPhone lens. I don’t have an external level for vertical format (yet) mainly because the panorama app has one built in.

Now you can also see why there is an open space at the bottom of the camera. I need the space to allow me to plug in the USB cord to connect the camera to an external battery for when I’m doing time-lapse sequences of the Bay of Fundy Tide, which is 6.25 hours, and the camera won’t run that long on the internal battery.

This time lapse was made on my iPod. There are several others but most use multiple cameras and the iPod or iPhone is only one of the total. 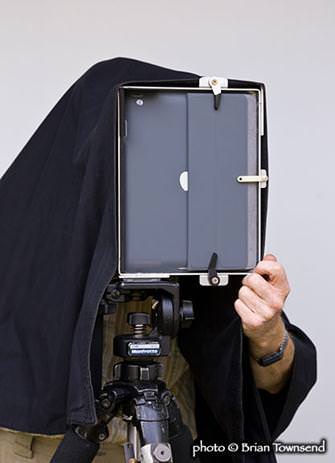 Here is a picture of me using the iPad frame with a black cloth for viewing. It has a velcro strip around the outside to secure the black cloth from my old 4×5 camera. You can also see the lens hood, which is also held on with velcro. For a tongue-in-cheek touch you can see that 2 of the levers holding the iPad into the frame are film advance levers from old cameras. Except for the fact that the image is not inverted, the experience of using the iPad with a dark cloth is very reminiscent of using my old 4×5 camera. The big screen is wonderful to work with when you can really see it. The black cloth has lead weights at the corners to reduce flapping in the wind. Of course, I have the iPad version of ProCamera on my iPad 3. 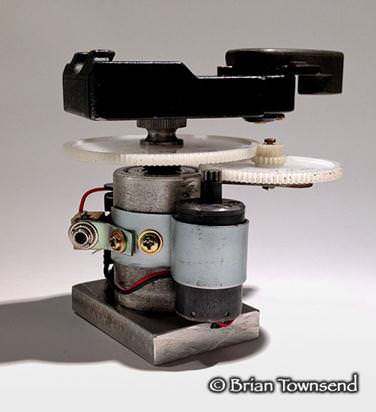 Here’s my last gizmo, I use it to make motorized 360 panoramas with the iPhone. It is made almost entirely of recycled parts. On top is a Manfrotto camera plate shoe. The gears come from an Epson printer, the central bearing part comes from an IBM copier, the gear motor is from an old camera. A single “N” battery powers it. The jack on the side is for the remote cable. It takes 1 minute for a full 360° rotation. It runs perfectly evenly so it works well for video, too. 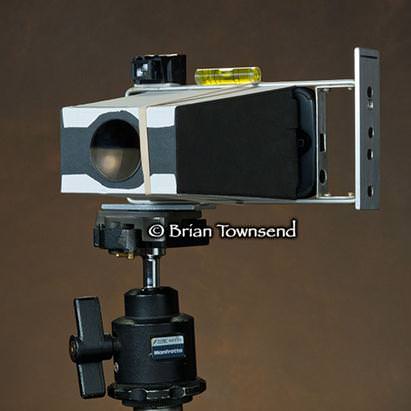 This device gives me clear view of the screen even in sunlight and lets me access screen controls, too. It is glued together out of photo matte board (black inside) and craft foam. The craft foam is soft where it touches the screen and has 3/4″ cuts to allow my fingers to poke through to access screen controls. Then they resume their normal position after I withdraw my finger. I planned to attach it to my tripod frame with velcro but in this prototype form I used an elastic. It turns out the elastic allows me to slide the viewer left or right if I need some different screen access.

The depth of the hood was determined by the convenient viewing distance of the lens. I found about 4″ was a good depth that allows viewing the whole screen with minimum distortion. A shorter hood requires some “looking around” to see the entire screen. I scrounged the lens from an old camera I took apart years ago. It is a 2 element cemented pair which gives a much better result than a single element lens, without distortion and colour fringing.

Now if I could figure out how to make it fold up!

Here are two of Townsend’s photographs taken with the Anti-glare viewer and ProCamera. 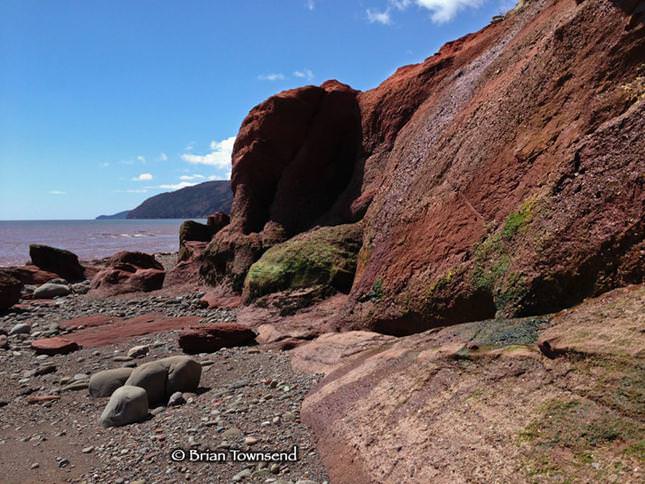 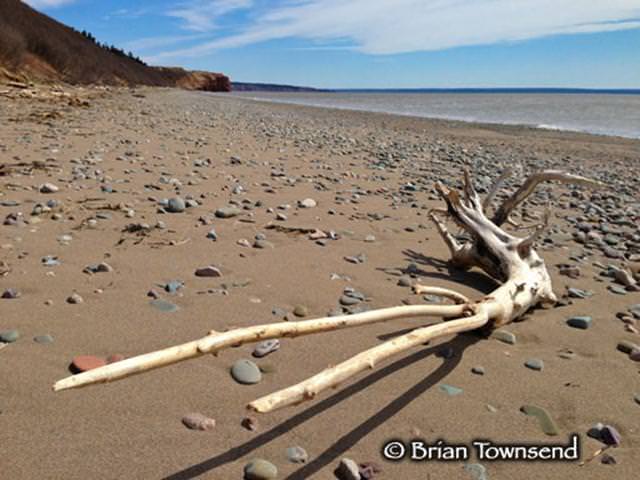 You can find more of Brian Townsend’s professional photography on his website.