As many iPhoneograpy fans are aware, ProCamera recently released its latest update (ProCamera 3.3) < read more. Included in update 3.3, is a popular feature we call “Volume Trigger.” This new feature allows you to take photos simply by pressing the iPhone volume control button. This makes the iPhone feel and function like many traditional “point and shoot” cameras. Volume Trigger also provides users the option of shooting photos via the “headset” volume controls. This is a particularly innovative function as it allows iPhone users to take pictures “at arms length” (length of your headset cord) without touching the iPhone screen. 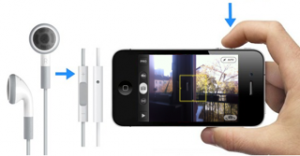 Using the headset controls is great for tripod shots, self-portraits, and taking photos when your iPhone is holstered. While ProCamera 3.3 already includes its innovative “Anti-Shake” technology, using Volume Trigger’s headset controls, can greatly minimize or even eliminate a common problem for every photographer, the lack of a “steady hand.” You can take your photos by pressing either the up (+) or down (-) volume button (both work). One final benefit of snapping photos with the headset, is the elimination of shutter noise. The “shutter click” is only audible through the earbuds.

Apple responded to the consumer benefits of shooting photos via the volume buttons by including this functionality in their latest iOS. Many camera apps reacted quickly and set out to “build” this new functionality into their own apps. But short cuts were taken and many other camera apps implemented a solution which “hacked” Apple’s iOS and “overrode” Apple’s volume controls (while in the app). NOT ProCamera. We have been respectful of Apple’s original intended functionality. This is perhaps one reason why ProCamera 3.3 (with Volume Trigger) was promptly approved by Apple.

ProCamera’s decision to not “hack” (override code) Apple’s original intended sound-controls, may prove to be the right decision. Competing camera apps, with their own version of ProCamera’s Volume Trigger, have recently run into compliance scrutiny by Apple’s app review team. This may be due to their co-opting iOS code that Apple intends to be preserved? Let me stress again, that ProCamera has been careful to not override Apple’s original intended purpose for volume buttons (sound level control), and hence we are confident that our Volume Trigger will remain unchallenged and greatly benefit ProCamera 3.3 users.

Here is an excerpt from Life In LoFi > VolumeSnap to Go Away – Again?

Since the release of iOS 5 and the addition of the Volume Button Shutter in Apple’s Camera, many third party developers have followed suit and implemented the feature in their own apps. Jeff McMorris from CodeGoo, creators of  Camera Genius tells Life In LoFi  that Apple has approved these apps “by mistake.”

Several third party camera replacement apps now have what has become known as “VolumeSnap”, including Camera Genius, Pro Camera and as of yesterday Camera+.

“Apple required us to remove it as they said they approved us by mistake and said third party developers are not allowed to use this feature even though Apple’s own camera application now has it. Unfortunately, I doubt we will be able to add this feature back again unless Apple allows it.

“It’s strange that they approved Camera+ today with the same feature. So it will be interesting to see if they are allowed to keep it.”

Once again, VolumeSnap looks to be in jeopardy. If you like the feature in your third-party photo apps, you might have to stick with the current versions of Camera+ (version 2.4 VS), Pro Camera (version 3.3), or downgrade to the previous version of Camera Genius (version 4.0.0).

I think it’s a great feature to have, especially when it doesn’t also jack with the iPhone’s volume. iOS 5 is that good and users won’t be flocking away from it in droves just because they can get VolumeSnap elsewhere. I hope Apple reverses this decision soon.