Google Glass: Light-weight wearable computer-cam — the next revolution in mobile? 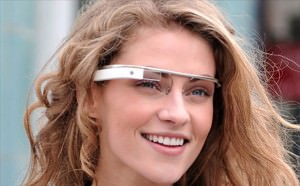 The trendiest new tech toy may soon be wearable computer glasses from Google that augment the wearer’s reality via the power of the Web. These high tech specs would allow users to access tools such as Google Maps, Video Chat and enables the capture (yes, it takes pictures) and sharing of photos and videos with friends on Google+.

Google is not the only player in wearable computers, but for the time being, their Project Glass prototype is getting most of the attention. The still ‘under development’ device includes: a tiny computer (memory + micro processor), a touchpad on the side, along with a camera, microphones, a speaker, an accelerometer, compass and gyroscope. All built into a light-weight pair of glasses. It appears that Google will introduce additional Glass form factors and a sunglasses version.

Project Glass demos thus far are showcasing the personal interaction and Net connectivity benefits. “The compelling use case for us is the sharing experience” ~ Sebastian Thrun, Google Project X. In the spirit of a video being worth 10,000 words, here is a clip showing Google’s vision for Glass when it eventually comes to market (circa early 2014):

Project Glass made quite an entrance this week at the 2012 Google I/O Conference. Google’s Co-Founder, Sergey Brin, took center stage and offered commentary while an intrepid team of skydivers performed a base jump from an airship high above San Francisco. The wing-suited flyers rocketed down to the City and landed safely atop Moscone Center. The demo then transitioned to a team of extreme bikers who peddled and bounced their way into Mascone and up to the stage. All skydivers and stunt participants were wearing Brin’s favorite new gadget — Google Glass, and throughout the demo, treated the assembled developers to a live, death-defying ‘point of view’ show.

With Sergey Brin’s backing, Google has made it clear that Project Glass will be an important initiative. After the I/O Conference, developers were invited to sign up for the $1,500 beta ‘Explorer Edition’ of Glass, which is due out at the end of 2013. The public version of Glass is targeted for launch in early 2014.

The evolution of eye-ware computers

In case you’re wondering, Project Glass is not the first time someone considered the notion of voice-activated wearable ‘eyeglass’ computers (read Epic history of wearable computers). Think back to the year 2000 and IBM’s ad Park Bench. An enthusiastic young man is trading commodities in his ‘anywhere’ office. His venue today is a bench in St. Marks Square (Venice, Italy). The man shouts orders — “Buy! Buy! No, sell!” and Siri obeys. Oops, did I say Siri?

And who can forget the Terminator’s field of vision data display:

People who live in Glass houses are eager to cast stones

To this point, we’ve only been treated to a few carefully choreographed Glass videos and stage demos. Google’s supporting ecosystem works flawlessly in these demos and we’ve now seen how Google envisions Glass ‘adding value.’ But tech pundits have not yet had the opportunity to ‘stress test’ the product in a non-controlled environment. And the skeptics opine… Questions, we have questions:

Google naturally has both Glass critics and defenders. Many have already weighed in on Twitter… 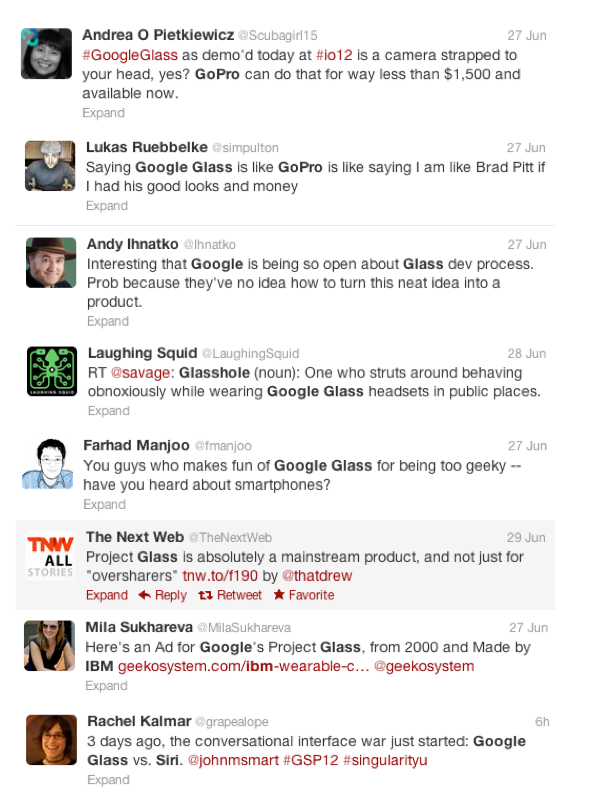 “Can anyone give Glass a run for the money?” That is a rather presumptuous question. We are already asking who can step up and challenge Google, when no one really knows whether Glass will gain wide public acceptance. And for that matter, will anybody’s new-fangled computer-cam gizmo succeed? Computerized eye-ware is an unproven space. There are now many new ultra mobile computers (e.g. iPad, iPhone, smartphones, etc) and there are certainly many excellent compact high definition cameras on the market. The trick will be combining the best of each into a lightweight hybrid ‘wearable.’ It must also be sleek, stylish and affordable.

The not quite ready for prime time players: What’s available NOW

Are there any decent computer-cams currently on the market? No and ‘Sort of‘…

No: Many police agencies and special forces (military) personnel are using some variation of a wearable computer-cam, but their devices are expensive and not designed with social media or the public (retail customer) in mind.

‘Sort of’: Several players have introduced wearable glassware or clip-on cams, including Microvision, MOD Live (for skiers) Looxcie, Contour, Vizux, and GoPro. But most of these companies offer sport cameras without the processing power or software needed to respond to voice commands. In short, while the aforementioned may compete well in a photo competition, they are generally not in the ultra mobile computer-cam business … yet.

Will there be any surprise entries in the wearable computer-cam hybrid space? Sony is apparently jumping aboard with some augmented reality specs they call Optical Communication Display Glasses.

Half Moon Bay based GoPro might also join the fray. GoPro delivers an edgy brand of excitement though their videos of Hero wearing thrill-seekers who tumble down waterfalls, surf the waves, and para-ski the Alps. 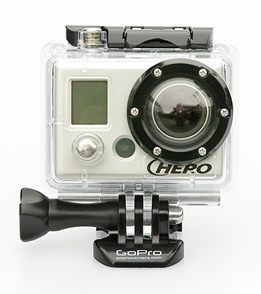 Certainly GoPro is one of the prominent players in wearable camera technology. Their Hero is, after all, lightweight, ‘wearable,’ virtually hands-free, and delivers crisp high def images. Will GoPro deliver ‘Hero-eye’ (just speculating) lightweight eye-ware with a brain? Or perhaps a tiny clip-on cam + app connected to an iPhone? Hmmm? It might be more interesting to see an Apple/GoPro partnership in this space.

Whatever the name of the Apple’s eventual eye-ware device (iShades? eye-Sight?), Apple can quickly be a formidable competitor. One reason why Apple can slide into this space is the fact that software + hardware + design + AppStore are critical for success. No one is better than Apple at building platforms and the seamless integration of elegant hardware and software. Apple’s ongoing development of artificial intelligence (AI) on iOS (aka Siri), is also a huge advantage. Apple has some catch up work to do in Maps, but they are on that project in a big way.

And here’s another notion… Apple may have already launched the wearable computer needed to power the glass screen. Huh? Well, it’s called the iPhone. Apple has proven that they can easily modify iOS software. Why not iOS integration with a wireless (or tethered) external miniaturized Apple iSight? This ‘mini’ clip-on iSight could function as a combination camera + tiny projector. This camera/projector might capture photos/videos and project images on to wearable glass lenses. Only time will tell if Apple will opt to join the party, but odds are they will.

Update July 3, 2012: U.S. Patent & Trademark Office (USPTO) today issued a patent to Apple that outlines techniques for projecting images onto the eyes of a user via a wearable display — “The display(s) and optics are typically embedded in a helmet, glasses, or a visor, which a user can wear.”

No matter who enters this market, it appears that light-weight, uber-thin wearables could very well be the next ‘big thing’ in mobile.