Thousands line up in China for iPhone 4S launch 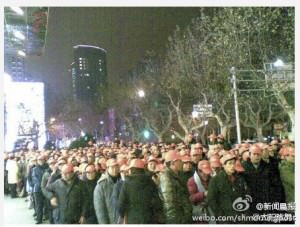 If the queues are any indication, demand for iPhone 4S in China, is as robust as ever. Apple is celebrating the Year of the Dragon by launching their latest iPhone in China. Not surprisingly, there have been reports of paid scalpers joining the lines. The demand for iPhone 4S is expected to far exceed initial supplies, and despite Apple’s efforts to control blackmarteering (limiting the purchase to just 2 iPhones per customer) scalpers are well represented in the crowds at all Apple storefronts.

The iPhone 4S, with the best iPhone camera ever (8 megapixels and advanced optics), will be offered through China Unicom. There have also been new rumblings about an iPhone running CDMA2000 (Model Number A1387), the 3G wireless protocol assigned to China Telecom, China’s 3rd largest carrier. The launch with China’s Cinderella carrier (China Telecom), is more that just a rumor, albeit no formal iPhone distribution deal or launch date has yet been announced. China Telecom plays Cinderella to her more dominant telecom sisters– China Mobile and China Unicom.

Photos (below) of iPhone 4S Launch in China (1/13/2012) courtesy of Shanghaiist. Read > more via Shanghaiist