There is an exciting solar eclipse coming up on Friday, March 20th, 2015!

With the forthcoming Solar Eclipse on Friday, we at ProCamera immediately thought of Matt Schwartz. He is an aspiring amateur astronomer and iPhone astrophotographer, who has provided us with out of this world photographs in the past. Living in the Indianapolis area, he won’t witness this eclipse personally, but was kind enough to share his thoughts on the process.

As some of you may already know, there is an exciting solar eclipse coming up on Friday, March 20th, 2015! Even though the eclipse will not be viewable in all areas (including North America), Northern Africa, the Middle East, parts of Asia, and all of Europe should get great views – better the further north you are.

With the upcoming eclipse, the good people over at ProCamera reached out to me asking if I had any tips for photographing the eclipse with an iPhone. Truth be told, I hadn’t really done any serious solar observing or photographing other than shooting sunsets. But this seemed like as good of a time as any to learn.

Safety is paramount when it comes to solar observing and photography. Without the proper protective equipment it is VERY easy to damage your camera, telescope, or worst of all cause immediate and permanent blindness. Even during a solar eclipse, it is critical that you take the proper precautions. Here is a great site with suggestions for solar viewing. The cheapest and easiest way is to get a pack of solar viewing glasses.

I wanted to try my hand at making a solar filter for my Celestron 70mm Travelscope. Unfortunately, with the eclipse in just a few days I didn’t have time to order in a solar filter sheet.  However, I did have a few solar viewing glasses lying around.  I found that by gently tearing apart the glasses I could perfectly preserve the solar viewing filters inside. This left me with 6 sheets, each about 35mm x 50mm in size. 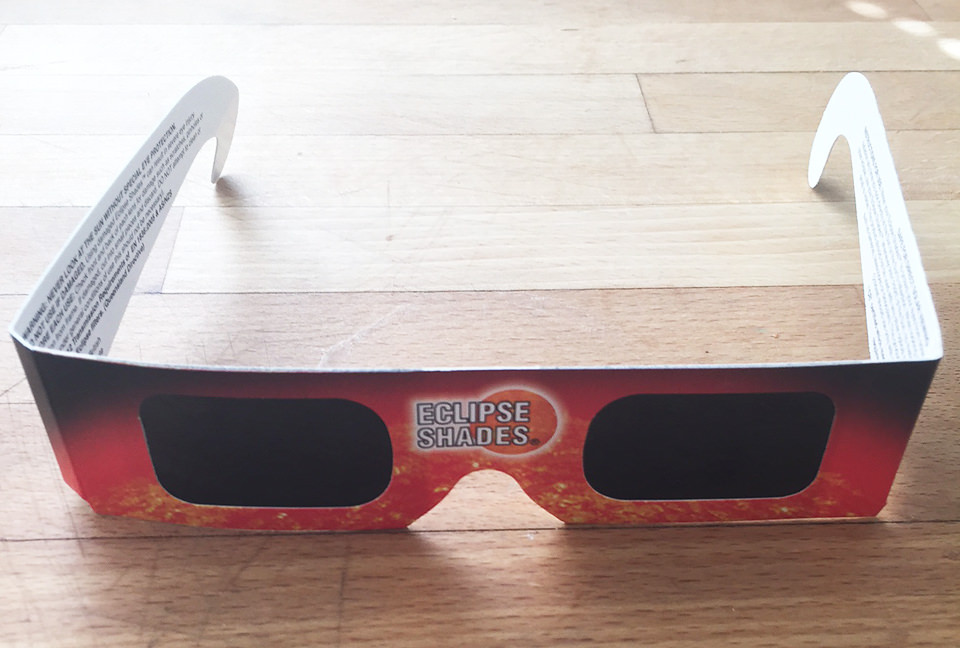 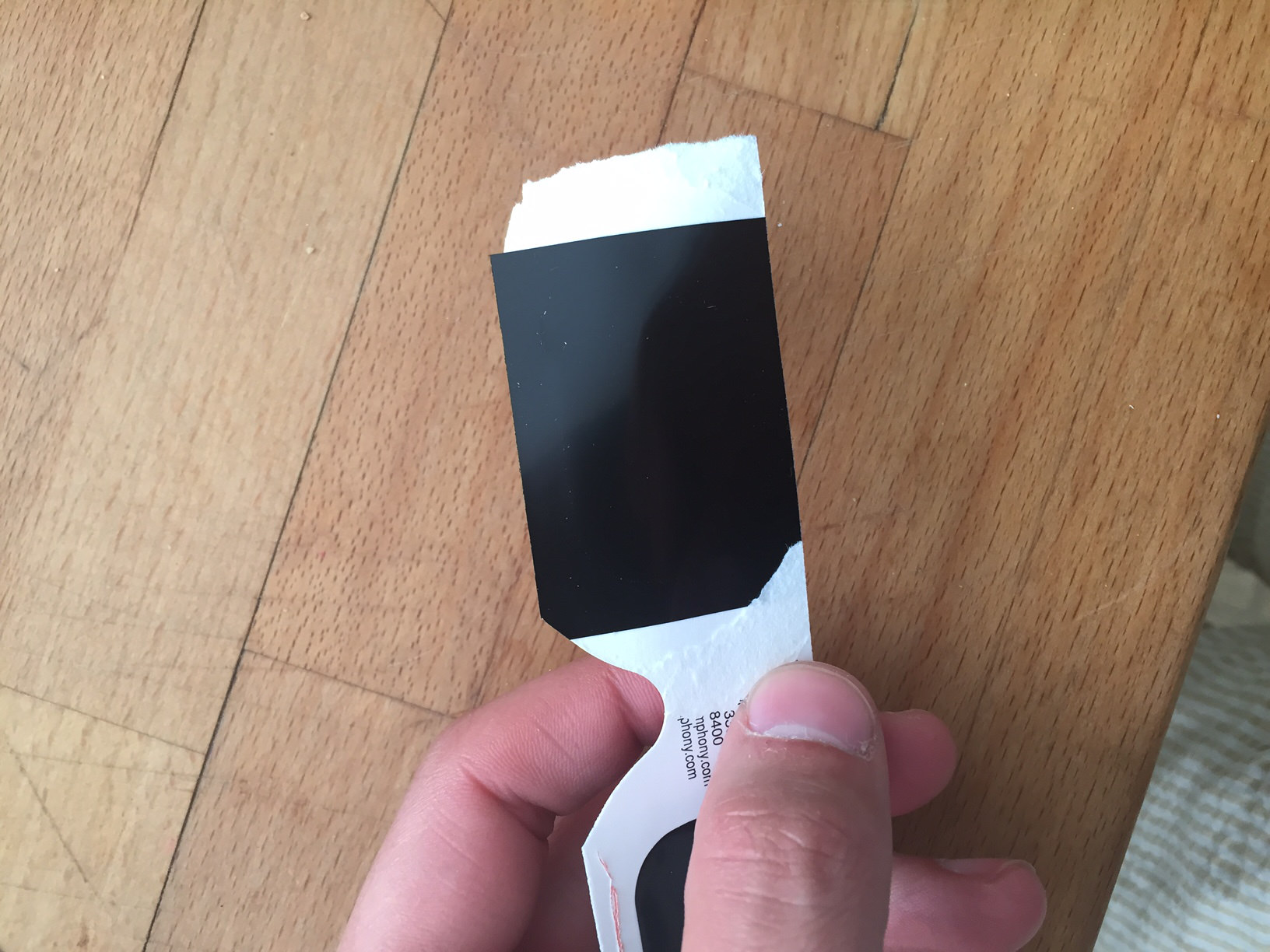 Then, I took a small piece of cardboard and cut out a circle using the 70mm telescope as a template. Next, I used some packing tape and gently laid out 4 of the solar filter sheets in an area to approximate the 70mm aperture. There were some small gaps, so I cut pieces of strips, making sure to overlap and not leave any gaps (could pose safety issue). I then taped the solar filter patch to the cardboard with the cutout and taped it firmly to my scope.

The end result was….functional, but certainly not pretty.  Having to tape together and overlap these pieces is definitely not ideal. Go with the larger solar filter sheet if you can! 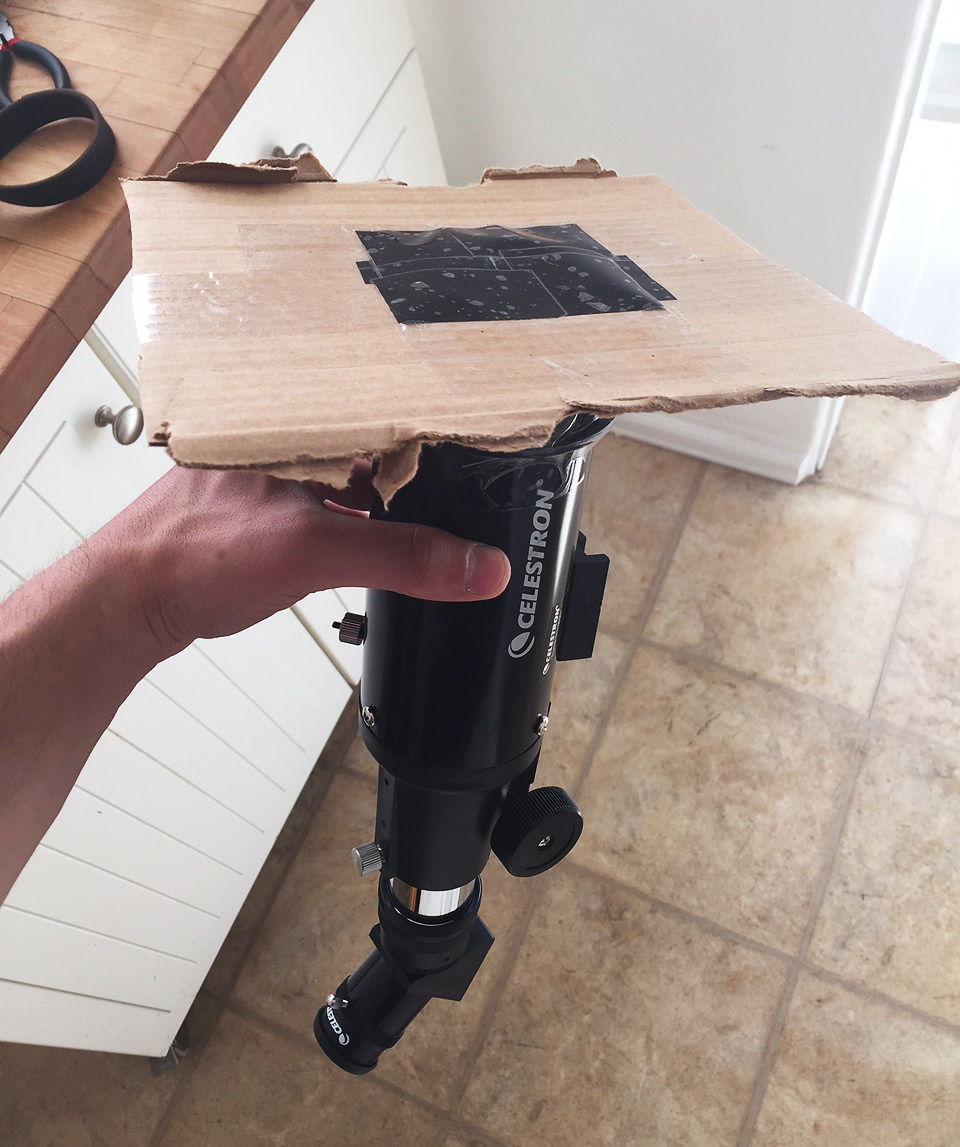 Again, not pretty, but safe and effective! I loaded the scope onto my mount and slewed for the sun. I used the Carson Universal adapter with my iPhone 6, and quickly got the glowing sun into frame. It looked about something like this: 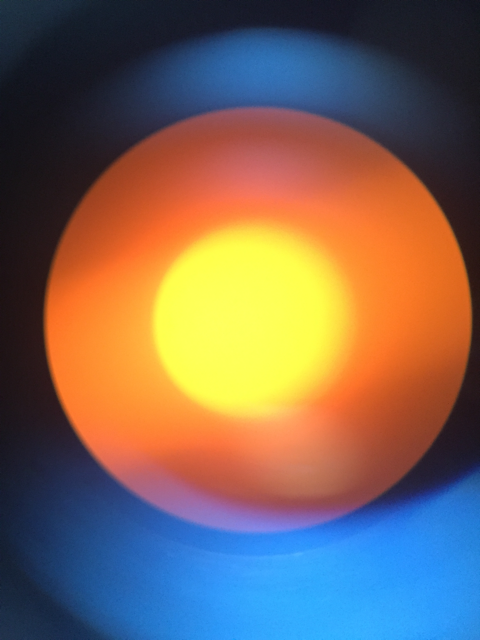 Initial View of Sun in Telescope.

iAstrophotography targets tend to be pretty tough objects for the iPhone camera to properly detect, expose, and focus. They’re either too big, too small, too dim, or too bright. The sun is no exception, and this is where ProCamera 8 really helps.

ProCamera 8 has really nice manual exposure and focus controls that will help you fine tune the look of your solar photographs. Especially with a telescope setup, the manual focus can be a huge help. I was shooting on a cloudy day (and we already discussed the suboptimal solar filter), but you can see the final results I was able to achieve through my very basic telescope, using an iPhone 6 and ProCamera 8. Bringing down the exposure and improving the focus greatly impact the shot. You’ll be surprised at how dark the filter really is when you’re setting the exposure.  Come solar eclipse day on March 20th, there is no question that you’ll be able to take great images with your iPhone and a telescope!

Don’t worry, you’re in luck! Even if all you have is an iPhone, you can still take great solar photos. You may have tried to take a picture of the sun on your iPhone before. It works great for sunsets, but even on a partly cloudy day, the best you can usually get mid-day is something like this: 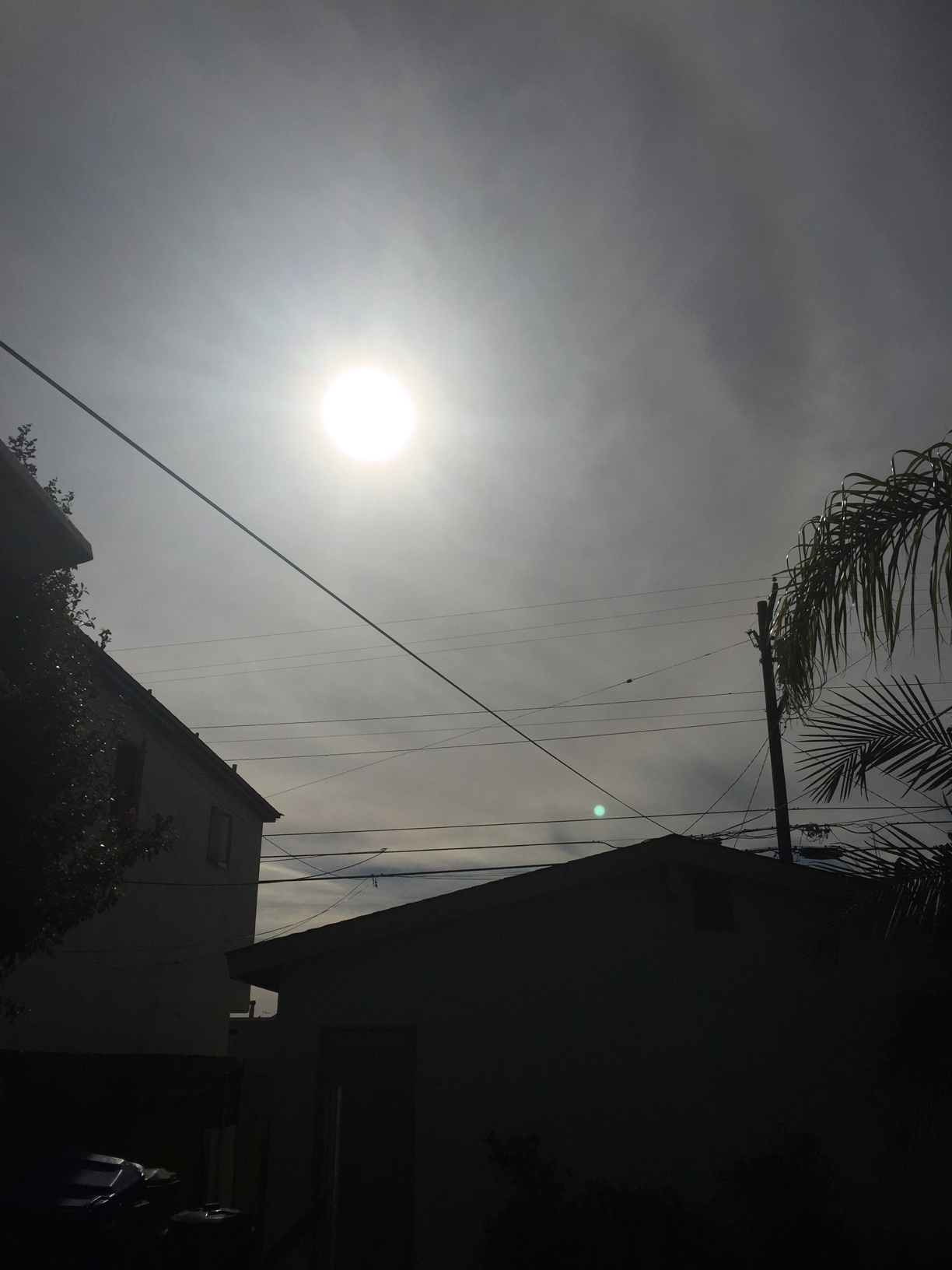 The sun is just too bright, even when trying to reduce the exposure with ProCamera 8. However, remember those solar filter sheets from the viewing glasses? Just one of those makes for a great solar iPhone camera filter. Now, you could easily just hold one of these over your camera lens, or maybe even tape it to your camera case. But, I found that these sheets work perfectly with that Carson Universal adapter. You just drop the sheet into the adapter, clamp your phone in, and it will stay perfectly in place. This gives you great control – I recommend using your earbuds as a remote shutter for even better control.

Just like that, you’re ready to take much better pictures of the sun. There are a couple of really nice features with ProCamera 8 that will help you out here. First, the manual exposure settings are essential. Because you’re likely shooting handheld rather than on a tripod, try to keep the exposure times fast and bump the ISO to what you need. Play around until it looks good! Second, the manual focus is a lifesaver. The iPhone really struggles to focus on the sun just by tapping. The manual focus slider will get you a really nice crisp image. Check this out, again through the clouds! 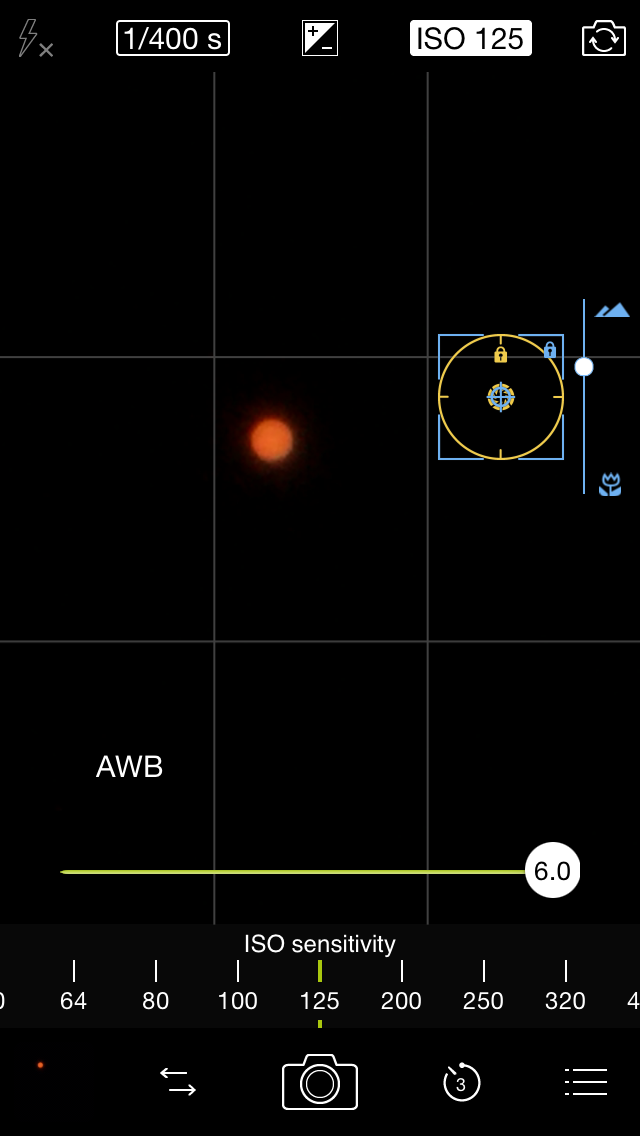 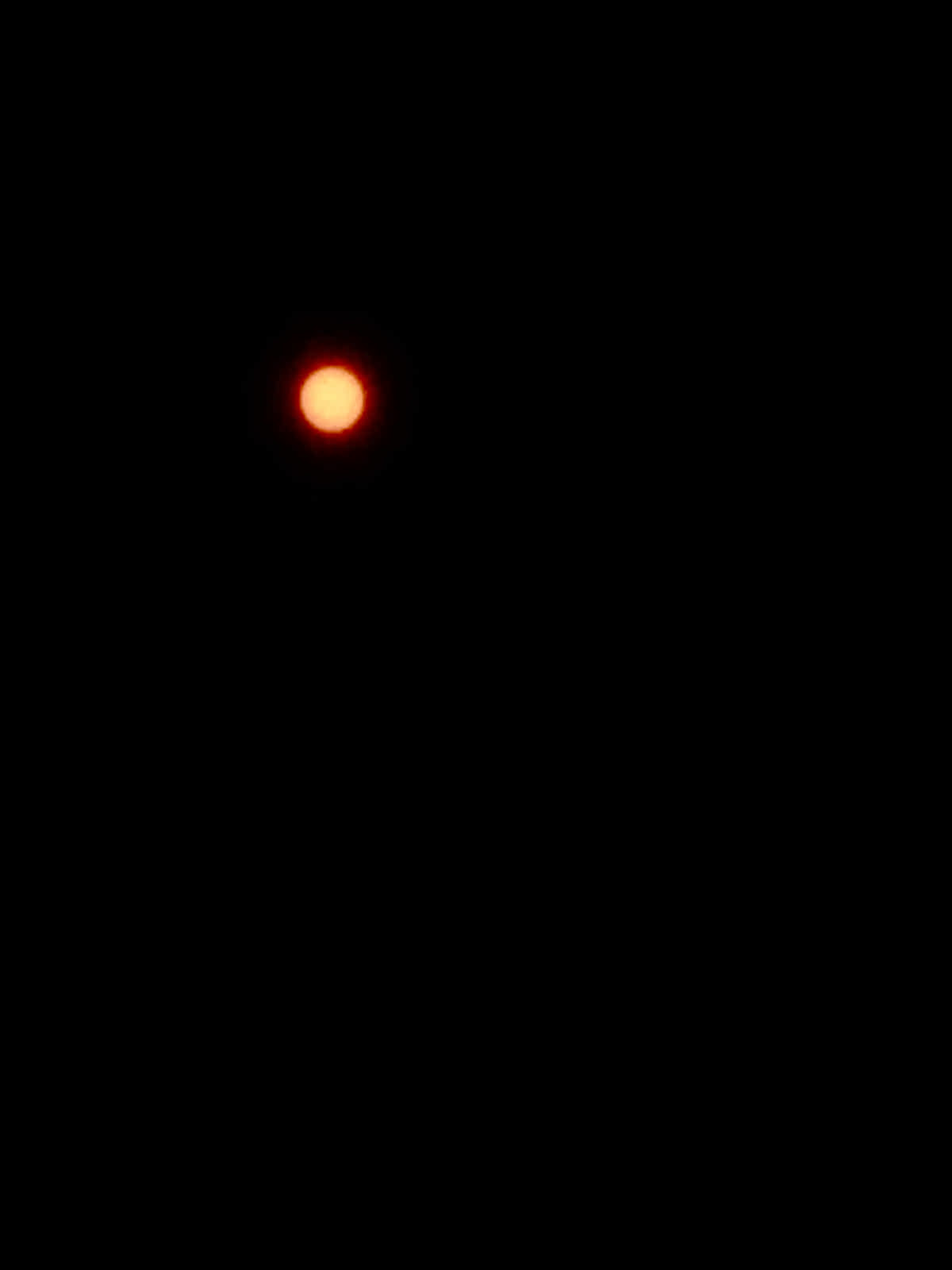 This is with the iPhone 6 zoom maxed out, but it’s still a pretty cool image! Good luck with your solar eclipse iAstrophotography later this week!

To see more of Matt’s work and creative process, head over to one of his various online presences:

EDIT: Encouraged by Matt’s explanation, we wanted to capture the Solar Eclipse, too. Luckily we had no clouds in the south of Germany on that day, it was just a little hazy. The special event lasted approximately from 09:30 am to noon — with a maximum coverage of the sun of about 73% (at 10:37 am).
In terms of equipment we utilized 4 things: An iPhone 6, an inexpensive 17x telephoto lens  (~30-50$), a little piece of a space blanket and of course ProCamera 8. 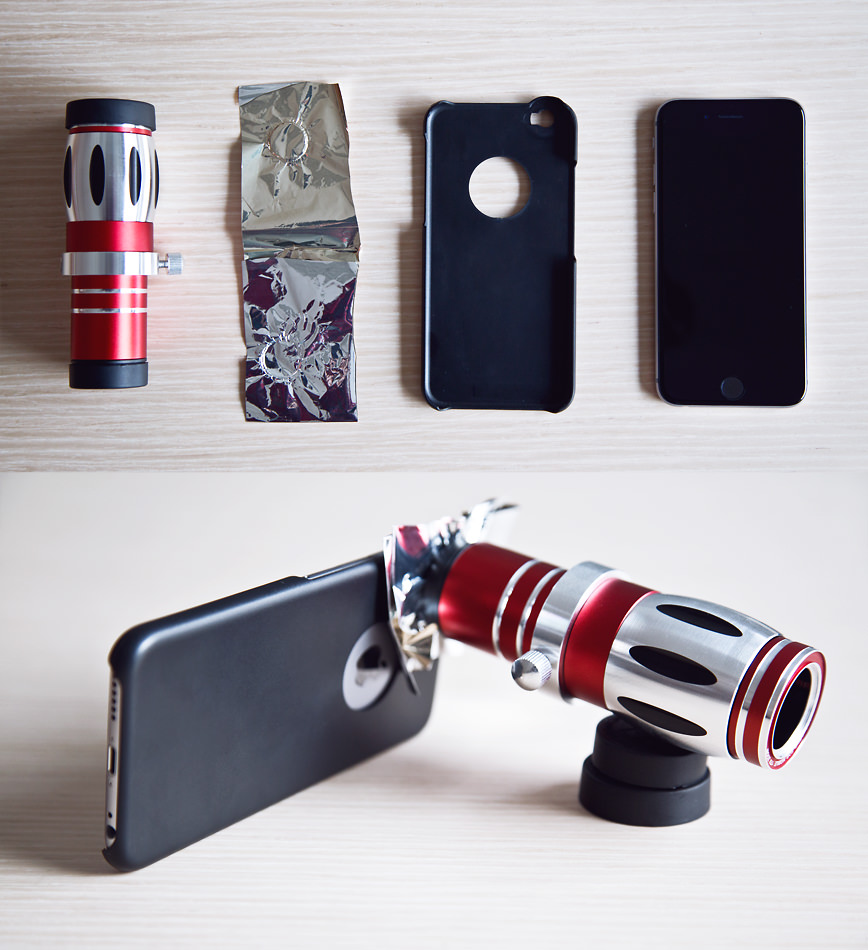 Our tools of trade for capturing the 2015 Solar Eclipse with the iPhone 6.

To be able to connect the tele-lens with the iPhone, you have to use the plastic back-cover (comes with the lens) that has a thread around the camera of the iPhone. To get some sort of darkening, we did a little “MacGyver” and put three layers of silver/gold space blanket (=survival blanket) between the tele-lens and the smartphone. This is the result we could achieve with this exact setup:

In this montage seven iPhone photos were combined in Photoshop. Because of the 17x magnification of the telephoto lens, it’s recommendable to use a tripod for stabilization.
As the autofocus has some difficulties in these extreme conditions, the manual focus capabilities of ProCamera come in very handy.
Over on Instagram we also uploaded a short timelapse video, that consists of 1.000 iPhone 5 shots of the partial eclipse (no gadgets, no zoom, no filters).